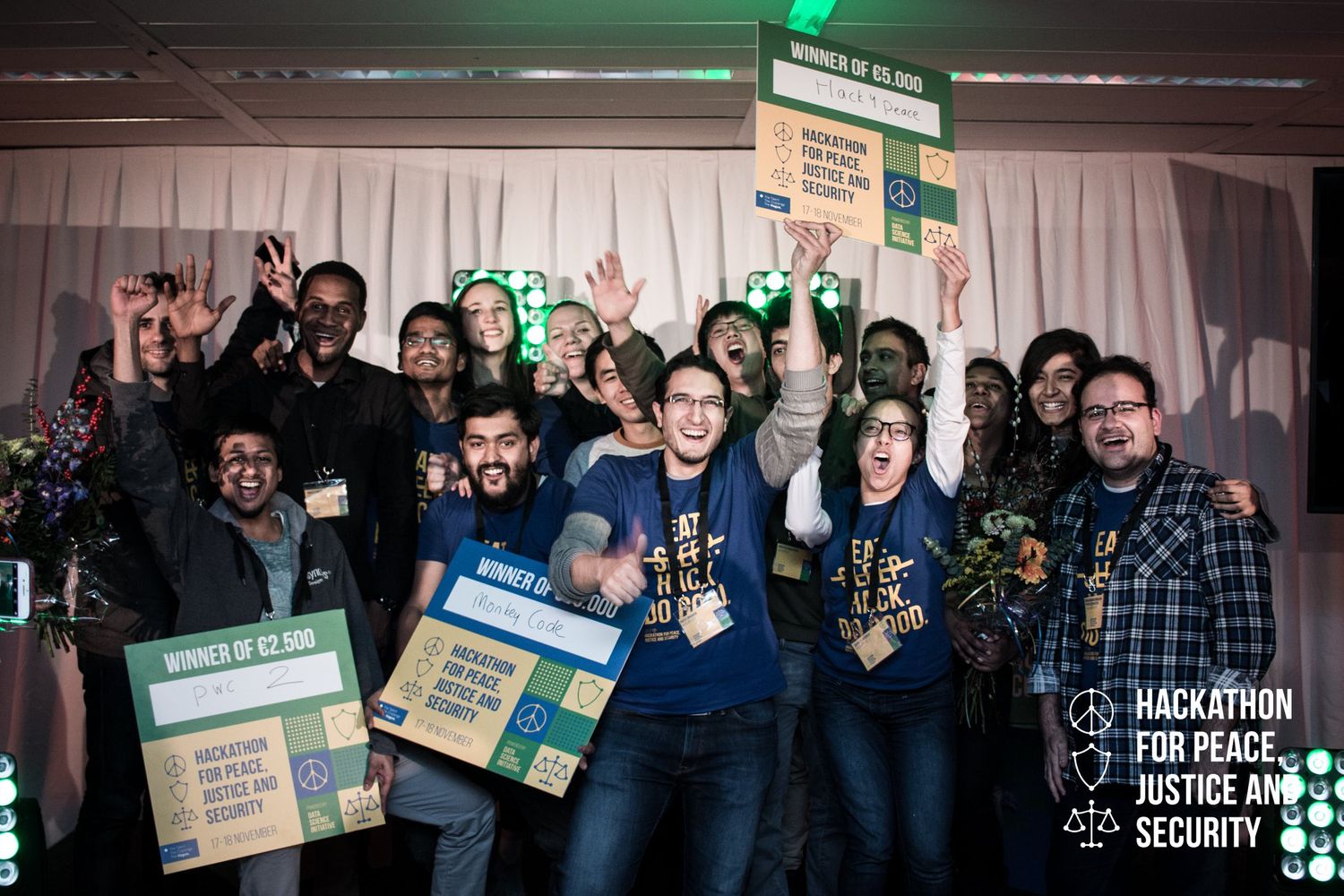 The 'Hackathon for good The Hague 2018' in The Hague was won by team Monkey Code with a solution to prevent land grabbing by combining satellite data with recent social media data. During the Hackathon for good, 27 teams of more than 22 nationalities worked on the development of innovative data solutions for problems focused on humanitarian disasters (Red Cross), fake news (NCIA), evidence (ICC), emergency funds (World Vision) and land grabbing (Asser Institute).

More than 120 tech talents from the Netherlands and abroad participated in the Hackathon for good this weekend. The jury chose Monkey Code as the winner because the team followed all the way through to find a solution for end uses in communities. Interesting was also the clever use of social media as part of their solution. In first place, team Monkey Code won a cash prize of € 10,000,-. The hackathon is one of the first projects of the Data Science Initiative, an initiative of tech entrepreneurs, universities, government and knowledge institutions in The Hague that are committed to peace, justice and security through big data and Artificial Intelligence: Tech for good.

Saskia Bruines, alderman Education, Knowledge Economy, International: "This hackathon is a good example of what we want to convey as the city of peace and justice. Working together with tech entrepreneurs, universities and knowledge institutions on solutions for global problems. It is a special event that I hope we can organize even more in the future!"

Winners Hackathon for good
The first prize was won by team Monkey Code with their open source solution based on combining satellite data with recent social media data (e.g. relevant Twitter hashtags) to predict areas that are vulnerable for land grabbing. According to the jury, the challenge required redefining and selecting the right information sources first. This team worked on the Asser Institute challenge: how to prevent land grabbing.

The second prize went to team Hack4Peace with a solution for the NATO/NCIA challenge how to detect fake news. This teams’ tool involves building a data set with inflammatory texts and images. Through AI based imagery and textual analysis, the tool can recognize propaganda and fake news. Part of the solution is an end user browser extension that detects and filters propaganda, meanwhile collecting new data to sharpen and scale the algorithm. The jury was very impressed by the technical solution, the focus on end users and scalability.

The third prize was won by team PWC2 with their solution for the Red Cross/510 challenge: how to estimate damage in disaster areas. PWC2’s approach was based on combining drone and satellite imagery to come to automated, yet very precise damage estimation, ideal for prioritizing aid. The jury praised the accuracy and speed of damage estimation, as well as the practical approach that can be implemented immediately.

The Hackathon
The Hackathon for Good is an initiative of the Municipality of The Hague and the Data Science Initiative, it is made possible by the following partners: